12 FEBRUARY, BIRTHDAY OF THEIR ROYAL HIGHNESSES VICTOR EMMANUEL AND MARINA, DUKE AND DUCHESS OF SAVOY, PRINCE AND PRINCESS OF NAPLES, A SPECIAL DAY THAT DELEGATIONS CELEBRATE BY ORGANISING SEVERAL EVENTS, WITH PARTICULAR FOCUS ALWAYS ON SOCIAL INITIATIVES.

On 12 February we celebrate the birthday of their Royal Highnesses Victor Emmanuel and Marina, Duke and Duchess of Savoy, Prince and Princess of Naples. On this occasion, which unites the Prince and Princess in a unique coincidence of time, many Delegations meet to organise a large variety of events, all of which are ideally underpinned by the common intention to share the joyful atmosphere of this special day.

Celebrations for the birthday of their Royal Highnesses also offer an opportunity to renew the ongoing commitment of the various Delegations to promote social initiatives by collecting funds that will be allocated to the charities they are involved in.

By way of example, we could consider donations collected during the gala evening organised by the Vicariate for the City of Monza and for the Province of Monza and Brianza and by the Dynastic Orders of the Royal House of Savoy, with guests including Fabrizio Sala, Vice President of the Lombardy Regional Administration, and Massimiliano Longo, the Monza Municipality’s Councillor for Cultural Affairs.

The profits of the evening will be allocated to project E-Lab Onlus for San Biagio After-School Activities, an educational solution to prevent youth maladjustment and early school-leaving, and to the Charity Initiatives of the Lombardy Delegation.

Three different shows were performed during the evening, before the Gala Dinner in the Grand Dining Room, the second largest hall of the Royal Villa’s staterooms. The Drama was staged with a performance directed by Luisa Gay with actors Francesco Tornar, Caterina Capra playing the role of Queen Margherita, and artist Simone Galimberti. Ballet enhanced the evening with choreography designed by Barbara Geroldi for dancers from Scuola Spazio Danza, Monza. Finally, for the moment centred on lyrical opera, Renato Cazzaniga, tenor from Brianza, and Raffaella Lee, soprano, sang together on stage, accompanied by Maestro Angiolina Sansale at the piano.

During the evening Eleonora Frigerio, President of the Valle del Lambro Regional Park, mentioned that a project had been launched in memory of Queen Margherita,

“I wish to thank Commander Luigi Mastroianni for inviting me to participate in this gala evening, and for our friendship, which can be traced back to 18th November, when the Regina Margherita Literary Park and the Valle Lambro Park were established. This project dedicated to Queen Margherita has just been launched as a result also of the cooperation of Ms Antonetta Carrabs and the Monza House of Poetry, who had this brilliant idea. The project is designed to enhance the value of the Royal Villa, its park and the entire city of Monza by giving credit to one of the most illustrious figures that lived here. I was very pleased when the greetings of His Royal Highness Victor Emmanuel were read during the inauguration of the Park, as he thus supported the initiative. I was equally pleased to know that the Vicariate of Monza is willing to partner us in the future. I shall make the most of this, and I look forward to meeting you at the next events that will be held in 2018”.

The Sicilian Delegation too celebrated this happy event with Delegates, Dames and Knights who met for a highly refined dinner that drew to a close when the cake was cut in honour of the Prince and Princess. The cake was decorated with the coat of arms of the House of Savoy.

Many other initiatives were organised with the same intention to celebrate the birthday of their Royal Highnesses Victor Emmanuel and Marina, Duke and Duchess of Savoy. On this occasion, the Delegations renewed their commitment to collect funds to be allocated to the many charity initiatives for the needy.

Monza, Villa Reale, the cake decorated with the symbol of the Orders.

Sicily, celebrations for the royal birthday.

Sicily, cutting of the cake, decorated with the Orders’ coats of arms. 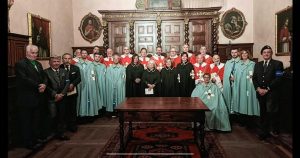 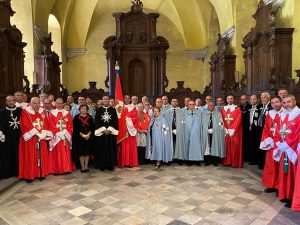 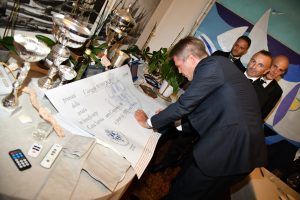