450TH JUBILEE OF THE FOUNDING OF THE ORDER OF SAINTS MAURITIUS AND LAZARUS, CELEBRATIONS, INVESTITURES AND SHARING OF VALUES FOR THE GENERAL CHAPTER OF THE DYNASTIC ORDERS OF THE ROYAL HOUSE OF SAVOY IN THE SPLENDID SETTING OF THE FOUR SEASONS HOTEL IN GENEVA AND THE ABBEY OF SAINT-MAURICE D’AGAUNE IN VALAIS.

The General Chapter of the Dynastic Orders of the Royal House of Savoy has just ended, bringing together over 400 dames and knights from all over the world, from Italy, Japan, the United States, Canada, Spain, Malta, and many other nations.

It was an intense three days on Friday 7, Saturday 8 and Sunday 9 October to celebrate the jubilee of the 450th anniversary of the Dynastic Orders of the Royal House of Savoy.

Friday, 7 October was an opportunity for the members of the Council of the Dynastic Orders of the Royal House of Savoy and the 38 Delegations to meet and share results, achievements, and to lay the foundations for an ever-growing future in the name of solidarity.

The Dynastic Orders of the Royal House of Savoy have a long history and continue to spread chivalrous values and Catholic ideals. In less than a year they have managed to support charitable projects worth over €700,000.

Saturday’s events started in the magnificent setting of the Four Seasons Hotel in Geneva, with the Ceremony of the handing out of Diplomas. More than 150 future members and to-be-promoted members had the privilege of taking the stage and receiving their investiture in front of some 350 people, including Royal Highnesses, Most Serene Highnesses and holders of High Offices of the Vatican, representatives of the Council and of the Committee of the Dynastic Orders of the Royal House. The ceremony ended with the blessing of H.E.R.MA Cav. Gr. Cr. Mgr. Paolo De Nicolò, Grand Prior of the ODDCS, who travelled to Geneva and was applauded by those present and a well-deserved success.

On the evening of the same day, again at the Four Seasons, there was a charity gala event at which, in addition to the ladies and knights, nobles and personalities from all over the world, TT.RR.HH. Prince Vittorio Emanuele of Savoy, Grand Master of the Dynastic Orders of the House of Savoy, his consort HRH Princess Marina, HRH Prince Emanuele Filiberto, President of AICODS, HRH Princess Maria Pia, HRH Princess Helene of Yugoslavia with her husband, Cav. Gr. Cr. Stanislas Fougeron, H.R.H. Ca. Ord. Supr. Ss. Annunziata P.pe Mariano Hugo Windisch-Graetz, H.E. the Grand Chancellor Ca. Ord. Supr. Ss. Annunziata Johannes Theo Niederhauser were the protagonists, together with many other distinguished guests.

A commemorative medal to celebrate the 450th anniversary of the foundation of the Order of Saints Maurice and Lazarus was presented to the dames and knights who attended the event.

The proceeds of the evening will be donated to Mus-E, an Italian organisation that promotes culture in remote Italian schools through art workshops to combat marginalisation and social hardship in schools.

Four musicians performed during the evening, during which an important award conferred on HRH Princess Marina by the Holy Father Pope Francis was handed out by H.E. Most Rev. Mgr. De Nicolò, who presented her with the honour of Dame di Commenda dell’Ordine Piano.

The Ordine Piano was founded on 17 June 1847 by Pope Pius IX with the brief Romanis Pontificibus to commemorate his first anniversary of reign, as a continuation of the ancient “Pious Knights” or “Piani” or “Participants” instituted by Pope Pius IV with the bull Pii patris amplissimi of March 1559. These noble knights formed the lay court of the Roman Pontiff, being called participants precisely because they “took part” in the life of the Pontiff, offering him an escort and often residing in the apostolic palace; they often shared the table with the Pontiff and accompanied him in the same way as the secret chamberlains of cloak and dagger.

The title is granted very rarely. It is conferred on personalities of distinguished status, almost always belonging to ancient European noble Houses, following high-profile services rendered to the Holy Apostolic See or directly to the person of the Pontiff.

It is granted after notification by the Apostolic Nuncio or, much more frequently, by motu proprio of the Pontiff, and it is not possible to apply, since the notification and practice is an internal Vatican act.

All conferrals, being a first class state honour according to international diplomatic manuals, are made in the solemn form of the papal brief, on parchment, with the seal of the Apostolic See, the decussate keys and triregno, and the signature of the Cardinal Secretary of State.

Sunday 9 October was dedicated to prayer in the Abbey of St Maurice in Valais, itself the repository of the Order’s history and origins.

H.E. Rev. Mgr. Paolo De Nicolò celebrated the solemn mass and recalled in his homily the birth of the Orders, emphasising the value and commitment of the dames and knights in social work, charity, assistance to others and always being available and on the front line in all situations of need.

A charity dinner in the adjacent dining hall concluded the three intense days full of unique and unforgettable events and happenings. 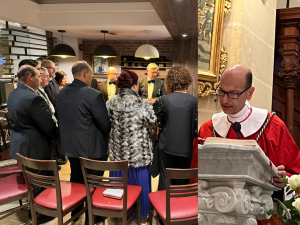 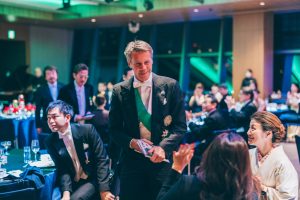