Several initiatives have been supported by the Campania Delegation during the Covid-19 emergency, from the “Pyjamas store” to the donation of a pulmonary ventilator to a retirement home, as well as various private projects.

Among them, the Knight Cav. Uff. Rev. Mgr. Luigi Castiello, as Chief Chaplain of several hospitals in Naples, decided to put under the aegis of the House of Savoy a further charitable initiative in support of the Ospedale del mare in Naples, a facility where some health workers involved in the fight against Covid-19 could find hospitality in order to minimize the risk of contagion in the family. All of this was made possible thanks to the solidarity of private individuals who made some lodgings available to the Delegation, the committment of Mgr. Luigi Castiello and of many volunteers of the Dynastic Orders of the Royal House of Savoy, coordinated by the Delegate Comm. Avv. Nob. Gerardo Mariano Rocco of the Princes of Torrepadula.

After completing some adjustment works, not without some difficulties, on the 4 April “Casa Mafalda” was opened. It is named after H.R.H. Princess Mafalda of Savoy Hesse, a martyr of war “who died in the Buchenwald Nazi concentration camp on 28 August 1944. “Casa Mafalda” is composed of two apartments and has a total capacity of 5 persons. The first one was named “COVID Apartment » and is intended for the accommodation persons who tested positive to Covid-19 after an oropharyngeal swab.

In 46 days, over various shifts, the home has hosted a total of 18 people including 7 doctors, 8 nurses, 1 laboratory technician and 2 social and health workers. Of these, three (all of them doctors) were hosted at the “COVID Apartment”, as they had tested positive to the virus and were being treated for it, and fifteen were hosted at the « Mafalda Apartment ».

Both apartments were equipped with a tiny library (which included the Holy Scriptures) and almost every evening, in thorough compliance with regulations to prevent contagion, there were moments of common prayer among the guests. On 15 May, after a final cleaning and sanitization, the apartments were returned to the owner who undertook to keep them at the disposal of the Dynastic Orders of the Royal House of Savoy until 31 December 2020 and leaving a room available to store all logistic and cleaning material.

The running costs of “Casa Mafalda” have been entirely covered by donations and the significant contribution of an association on behalf of the Delegation for Campania of the Dynastic Orders of the Royal House of Savoy. 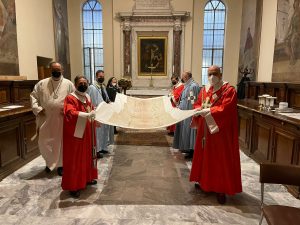