NIZZA – The purchase of a first response emergency fire vehicle donated to the non-profit organisation Feux et Forets of Nice, for first response in the event of forest fires.

This is the gift from the Italian Royal Family in the name of the ancient orders of the Dynasty and with the contribution of the Giger Foundation: His Royal Highness Emanuele Filiberto Of Savoy, Prince of Piedmont and Venice handed over the keys of the vehicle on 10th September 2017, at 16.00 p.m., to the President of the Association Pierre Borghini, in the chapel of St. Hospice, historically linked to the House of Savoy.

«I am happy to be able to support the ONG Association – Section d’intervention Feux et Forets di Nizza, commited, with its professional volunteer members, to fighting fires in the wonderful forests of Nice, the Cote d’Azur and abroad. The terrible fires emergency that has devastated these wonderful coasts could not leave my House indifferent: we have a deep love for Nice and the Nice area and are bound to it with many historical and emotional links. Worsened by the drought, this situation has caused enormous damages and it is my hope that longer sentences will be given to arsonists. It is out of the question that those responsible for these authentic crimes should be allowed to go unpunished. Destroying the beauty of these places, endangering human lives and the survival of the flora and fauna of the Nice area, is scandalous.

The attention of the House of Savoy to the environment has always been written in the DNA of the Dynasty: you just have to think of the many nature reserves created by the Sovereigns of Italy, one of the first of which was the Gran Paradiso Nature Park, the pride of the Valle d’Aosta.

Together with Mr. Pierre Borghini, local authorities and some representatives of the neighbouring delegations of the Dynastic Orders of the House of Savoy, His Royal Highness Prince went to the Chapel of St. Supplice, at St. Jean Cap Ferrat, a place of worship completely rebuilt by his predecessors, where the vehicle was blessed and the keys handed over to the association.

During his speech, Jean François Dieterich, the Mayor of Cap-Ferrat, expressed his great gratitude to the Dynastic Orders of the House of Savoy, moved by the honour of receiving their representative in such a historic and symbolic place, which has always been linked to the generosity of the Royal House.

The SIFF is a no-profit organisation created in 2014 to intervene in large-scale forest fires and to give its full assistance and experience when the territorial resources already involved face difficulties in managing the intensity of fires.
It is a fast, independent, non-territorial first response unit which can travel to any part of the world at any time. It is the first international humanitarian organisation specialised in fighting forest fires. All the members of the SIFF are specialist fire fighters, working on a voluntary basis during their own free time. 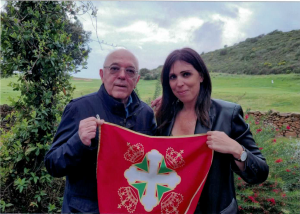 THE CORSICA DELEGATION PARTICIPATES AND COLLABORATES IN THE ORGANISATION OF THE OPEN DAY AT THE MURTOLI ESTATE TO SUPPORT THE NON-PROFIT ORGANISATION “INSIEME”.