SAVOY (FRANCE) – More than 700 people met at the Royal Abbey of Hautecombe on 16 March for the annual celebration of the traditional Holy Mass in suffrage of Their Royal Highnesses King Umberto II and Queen Maria José.

On 18 March 1983, His Royal Highness King Umberto II died, in exile, at the Cantonal Hospital of Geneva, fortified only by his Faith, without the consolation of returning to his Homeland. Unfortunately this exile has lasted beyond the death of the Sovereign. This is one of the main reasons why the ceremony held in Hautecombe is deeply felt by members of the Dynastic Orders of the Royal House of Savoy.

Consistently with the traditional custom, the Sacred Rite was celebrated by the Archbishop of Chambery, Maurienne and Tarentaise, His Excellency Mons. Philippe Ballot, and was attended by Their Royal Highnesses Prince Victor Emmanuel, Princess Marina and Prince Emanuele Filiberto. On this occasion the Royal Family was joined by His Royal Highness Prince Serge of Yugoslavia, Knight of the Supreme Order of the Most Holy Annunciation, and by Her Royal Highness Princess Mafalda of Savoy, Landgravine of Hesse.

The ceremony, sponsored by the Ceremonial Office and, particularly, by the Grand Officer, Lawyer Gualtiero Ventura, assisted by Auditor Alberto Di Maria, witnessed the extensive participation of Authorities, Dames and Knights, Guards of Honour, loyal monarchists of the various associations and sympathisers. A unit of the Carabinieri too attended the event, attired in high uniform.

The Holy Mass was attended by various Mayors and representatives of the Municipalities, including the municipality of Alessandria, and several associations of the armed forces, including the National Federation of the Blue Ribbon Institute of Fighters and Subjects Awarded the Medal of Military Value, and the National Institute for the Guard of Honour at the Royal Tombs in the Pantheon.

Along with the memory of Their Royal Highnesses, the intentions of the Holy Mass were also dedicated to Her Royal Highness Princess Mafalda of Savoy, who met a tragic death in the Nazi concentration camp in Buchenwald on 28 August 1944. At the end of the celebration, which was animated by the Chorus of San Cipriano, the official representatives of Volunteer Nurses of the Italian Red Cross, specially gathered at the Royal Abbey for the event, paid homage to the magnificent figure of Her Royal Majesty Queen Maria José, “Sister Mary of Piedmont”, recalling her untiring work in the Corps, conveying a Message from the national leaders.

At the end of the celebration, their Royal Highnesses met the people present in the Grange Batelière, at the foot of the Abbey, in the setting of a vin d’honneurorganised by the Savoy Delegation.

Consistently with the previous year, and as a practical sign that the Royal Family was deeply bound to the Abbey, the Dynastic Orders of the Royal House of Savoy made a donation to the Chemin Neuf Community for renovation works at the abbey, which are progressing. 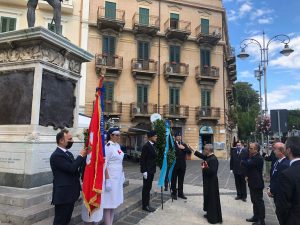 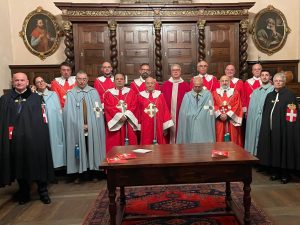 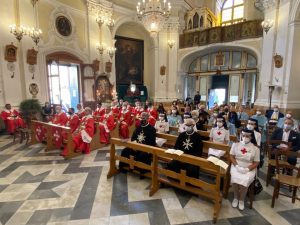