After a two-year hiatus due to the pandemic, the Prince of Piedmont and Venice, Emanuele Filiberto of Savoy, returned to Naples for a ceremony to invoke the Miracle of San Gennaro at the Basilica di Santa Chiara, presided over by His Excellency Mgr. Domenico Battaglia, Metropolitan Archbishop of Naples, who received the August Prince after the celebration, together with the Mayor of Naples, Prof. Gaetano Manfredi.

In the evening, a Charity Dinner was held. It was organised by the Naples Delegation of the Dynastic Orders of the Royal House of Savoy, headed by Comm. Gerardo Mariano dei Principi Rocco di Torrepadula, at the Circolo Nazionale dell’Unione, at the Royal Palace of Naples. The Club was founded by patriot Carlo Poerio in 1863 and the Father of the Fatherland, King Victor Emmanuel II, made some halls of the Royal Palace available to the members so that the Neapolitan aristocracy who were loyal to National Unity could have a place to meet.

HRH Emanuele Filiberto was received very warmly by the President of the Club, the Marquis Giuliano Buccino Grimaldi, and by the Councillor of the House, the Marquis Emanuele de Montemayor, who asked HRH to sign the Club’s Book of Illustrious Guests.

The dinner was attended by 150 participants and some of the donors who could not attend the event sent their support for the charitable projects that were funded on this occasion: the creation of two scholarships for deserving students at the Nunziatella Military School and a contribution for the war-torn Ukrainian population.

In addition to a large number of Members of the Dynastic Orders of the Royal House of Savoy, a significant number of Neapolitan aristocrats and members of civil society took part in the charity event. Also present was Prof. Anna Poerio Riverso, Dame of the O.SS.M.L., descendant of Baron Avv. Carlo Poerio, who dedicated to HRH two of her books on the Neapolitan patriot.

The next day, Sunday 1 May, HRH visited the Coral Museum of the Ascione family, located in the picturesque setting of the Galleria Umberto I in Naples. This ancient coral manufacturer was particularly appreciated by the House of Savoy: HRH was shown in particular the bonbonnières the Asciones made for the christening of HRH Vittorio Emanuele, Prince of Naples, for whose birth the cradle, now kept in the Royal Palace of Caserta, was also made. Newspapers and letters of the time also recalled the meetings between the grandparents of the current owners of the workshop and the Princes of Piedmont, Umberto and Maria Josè. Lastly, the Ascione family was also commissioned by King Umberto II to make a precious pyx made of gold, coral and gemstones, which was donated to the Tesoro di San Gennaro.

The visit ended with the celebration of Holy Mass in the Franciscan Church of San Pasquale a Chiaia on the occasion of the jubilee year of the Mauritian Order. The service was attended by a large number of members and a painting of Blessed Maria Cristina of Savoy, to whom the side altar of the church is dedicated, was presented to HRH Emanuele Filiberto. 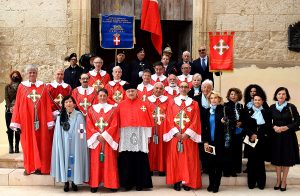 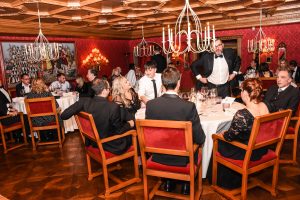